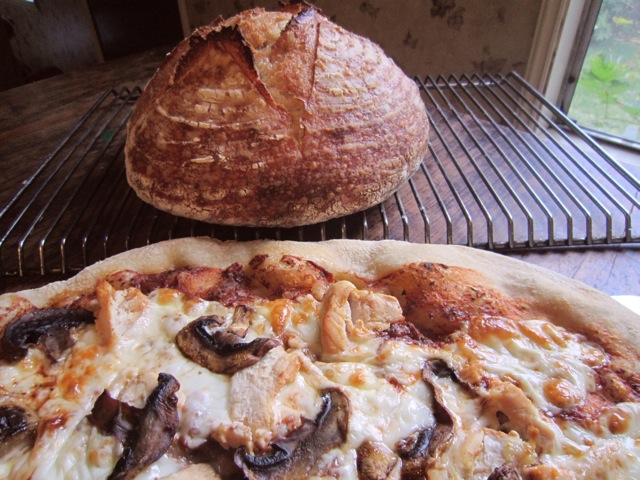 For those of you who like to bake with sourdough, I have a pizza crust that you will find intriguing.  It is handy to use dough which is already fermenting in your refrigerator, and to whip up a pizza for dinner.  Big Bear’s Bread (BBB) is such dough. It is a popular, long fermented type of sourdough bread and is a good choice for pizza dough. The formula for BBB is enough for two large loaves of bread or several large pizzas (about four pounds total).  The dough is made up and then ferments in the refrigerator for several days.  This past week I had a batch of it going and baked up a loaf of bread. It makes a really nice loaf of bread; the dough is higher hydration dough than standard bread and produces a moist open crumb. Since I only baked up one loaf, I had plenty of dough left and decided to make up a pizza for dinner to see how the dough performed for pizza.  It performed really well. The crust came out chewy with an open holey crumb. You can find the formula and technique for Big Bear’s Bread here: http://www.northwestsourdough.com/discover/?p=1870 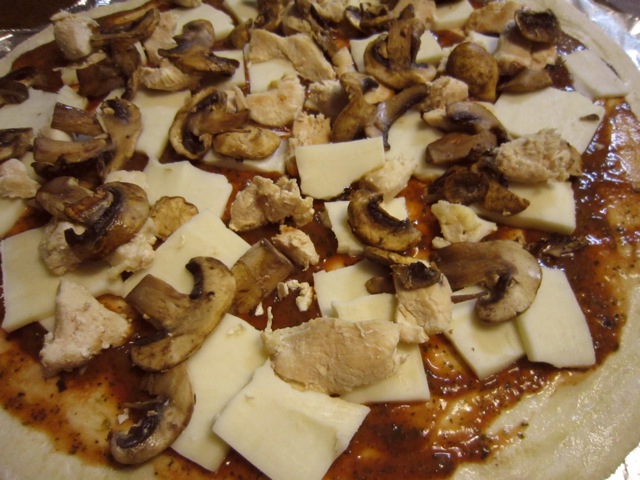 Add your favorite sauce, a good cheese, or several and some chopped mushrooms…

To get the dough ready for pizza, take it out three to four hours before baking time. I had the dough made up into a round while it was under refrigeration. I took out the round and pulled it out somewhat flat so it could warm up to room temperature more easily. After an hour I pulled the dough out into a large round, about 16” in diameter ( I have a large pizza peel).

You can easily make two or even four smaller pizzas with this amount of dough (about two pounds of dough).  Once you finish pulling out the dough, the gluten is somewhat tightened so you need to place the dough onto a baking parchment paper or some foil at this time. If you wait to move your dough until later, it will relax and, being high hydration dough, it will be very hard to move.  Spray your 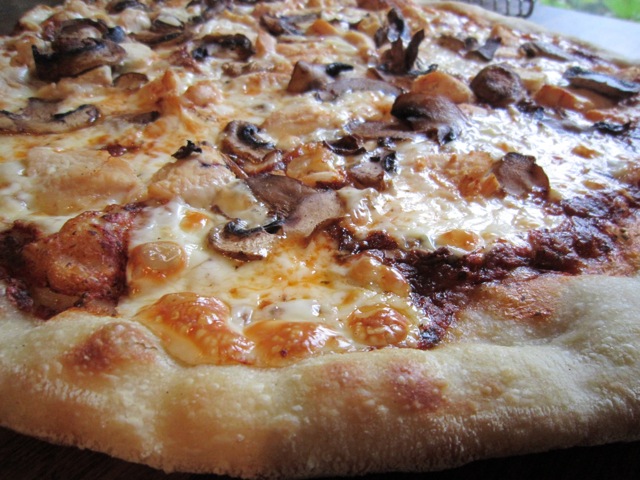 dough with oil, cover with some plastic wrap and allow it to set for two to three more hours. It will not look very bubbly, but cold fermented dough is like that and will surprise you once it comes into contact with the intense heat of the baking stone.  When your dough is ready and your oven/baking stone are preheated for an hour as high as it will go (550F for my oven), spread on your sauce and toppings ( I used basil sauce, chicken, mushrooms and mozzarella cheese) and then using your pizza peel, transfer the pizza to the hot baking stone. Bake until done about 10 – 12 minutes.
For dough that is cold fermented, using a similar technique Peter Reinhart made famous with his Pain a la ‘Ancienne bread (Bread Baker’s Apprentice), the Co2 is absorbed into 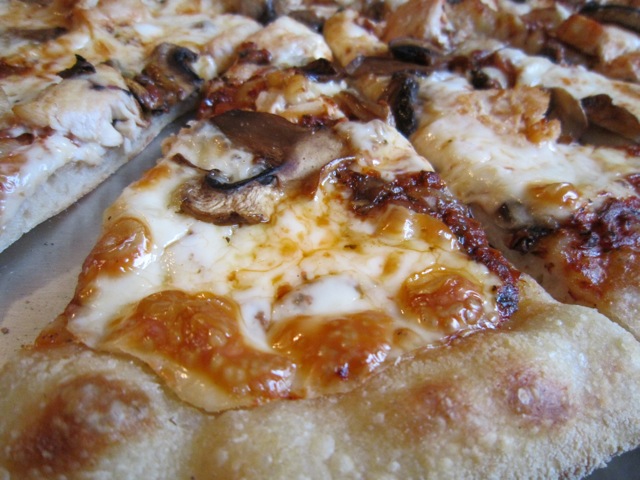 the cell structure of the dough and does not always show large bubbles in the dough while it is rising. However, once the dough is subjected to intense heat, the Co2 is liberated and forms many bubbles as it expands. So don’t be surprised if your dough, which can seem a bit inactive, looks great once it exits the oven. This long fermented dough probably isn’t practical for many folks, but for those that like to have fermenting natural levain dough setting around in their refrigerator anyway, it is a versatile way of using up the extra bread dough.  I would recommend adding an ounce of oil to the formula if you know you are going to use it for pizza dough.