I’m still riding the high of last week’s International Symposium on Bread, but it’s time to get back to pizza, which I will do in next week’s posting, featuring a wonderful interview with world pizza champion Leo Spizzirri.  Look for it to post on Tuesday, June 6th. 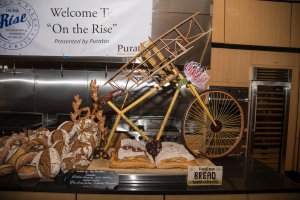 Harry Peemoeller’s amazing bread sculpture; a tribute to the Wright Brother’s from ideation to aviation.

But, for now, a few final words about the bread symposium, whose theme was “The future of bread.” In my last post I gave you a link to a fine article by writer Michael Solender that offered a few highlights of the event, so I won’t try to recap the whole thing here — just follow the link at http://www.charlottefive.com/the-future-of-bread/ .  But I do want to share a few key takeaways that I gleaned from the ten amazing speakers who presented. While each presentation was a highlight in itself, and the fellowship energy of 200 passionate bread-heads gathered in one place is impossible to convey in words (after all, PizzaQuest is really all about such kindred passion, whether through pizza or any craft, so we’ve been attempting to capture that feeling here for the past five years), there were three ideas that emerged that sort of popped for me.  So, because I want you to remember that you heard it here first (unless you already knew these things before, which I’m sure many of you did) here are my top three takeaways about the future of bread:

—First, bread is back (it actually never went away). For example, Tom Gumpel, head of bread innovation at Panera Breads, announced that they will soon be rolling out a whole new generation of better tasting and better-for-you breads featuring whole grains, sprouted grains, natural leavening, and improved texture and flavor. And Stefan Cappelle, who came in all the way from Belgium to deliver the keynote address, emphasizing that future of bread is found in its past, which is why his company, Puratos, has established a sourdough library where they keep alive over 90 sourdough starters from around the world and study their micro biology. 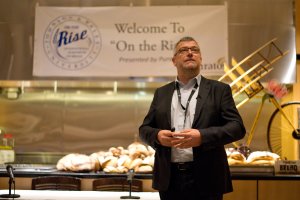 Stefan Cappelle, of Puratos, giving the keynote address: “The Future of Bread is Found in It’s Past”

—Remember this phrase: “Just in time milling.”   Both Wolfgang Mock, the godfather of the home milling  movement, and Chad Robertson, the reigning poster boy and visionary of the artisan bread movement, spoke about the importance of eating bread made with “just-milled” flour. Chad’s new bakery, Tartine Manufactory in San Francisco (and soon also in LA), mills the flour right there, in front of the customers, before mixing the dough. Wolfgang’s new Mockmill, which can attach to any home mixer such as a Kitchen Aid, will stone grind flour from any grain as you need it. He prepared a delicious just-milled oat berry cereal called muesli, for the audience and told us he’s been eating it every day for years, and attributes his robust health and energy (he’s around 70 years old but seems more a 30-year old) to this day-starter cereal. “When grain is milled fresh, you can eat it raw, uncooked!” he told us. So, whether raw or baked in bread, we’re going to be hearing a lot more about the benefits of freshly milled flour.

–My candidate for the word of the year: poly-crop. Glenn Roberts, the brilliant founder of Anson Mills, spoke of the “perfect acre” in which a number of grasses (like wheat and rye and oats) and other compatible plants, grow together and are harvested in vertical layers as they ripen. The result: healthy soil, no need for crop 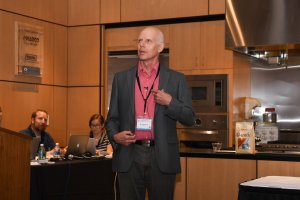 Wolfgang Mock, the godfather of the home milling movement, who coined the phrase, “Just-in-time milling.”

rotation or chemical fertilizers, and the best tasting versions of these plants that nature can produce.  This is not a new idea — I remember reading about it back in the 1960’s and thinking it would change the world. Well, ideas sometimes take time and sometimes they go dormant and then crop up again when their time has come. Good ideas don’t die, they just need time and good soil to germinate. Poly-crop is back!

If you want to watch the whole proceedings, use the following link. https://livestream.com/accounts/12150536/events/7404932   It’s a lot of footage, so we will soon also transfer the individual talks to YouTube, and I’ll announce that here when we do. 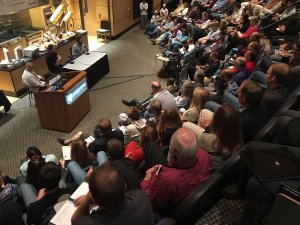 On The Rise: The 2017 Johnson & Wales University International Symposium on Bread.

Okay, next week we’re back to pizza pizza pizza! Welcome to summer, everyone, and may your bread always rise!

Note: If you want to be added the mailing list for the next Symposium, please write to me at symposium@jwu.edu and send your name and email address.